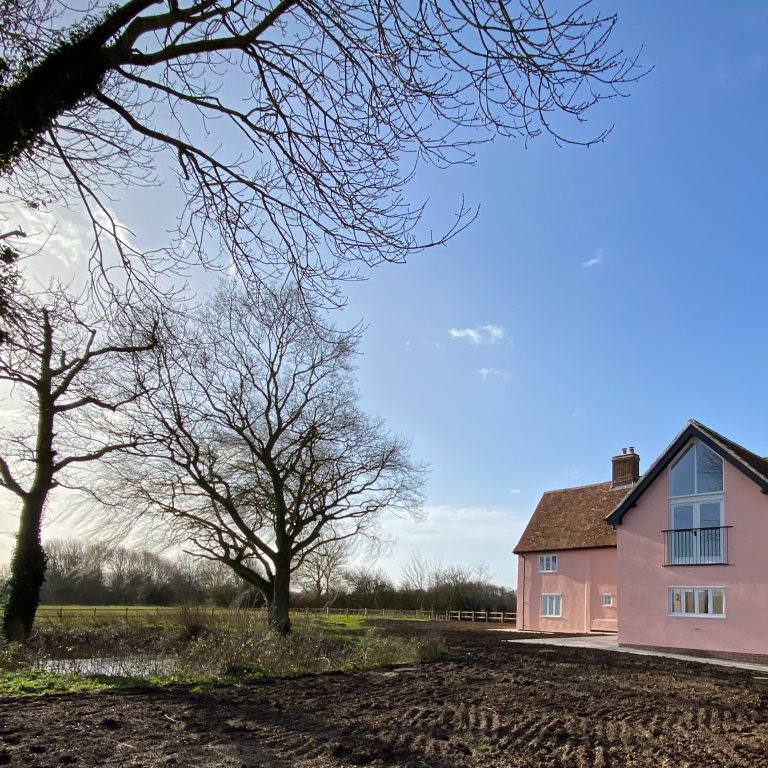 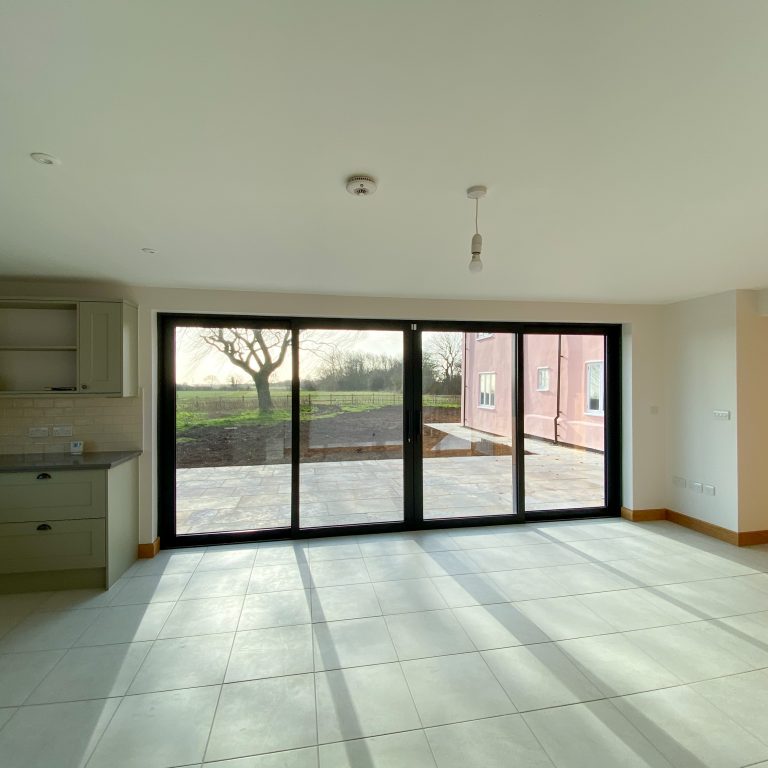 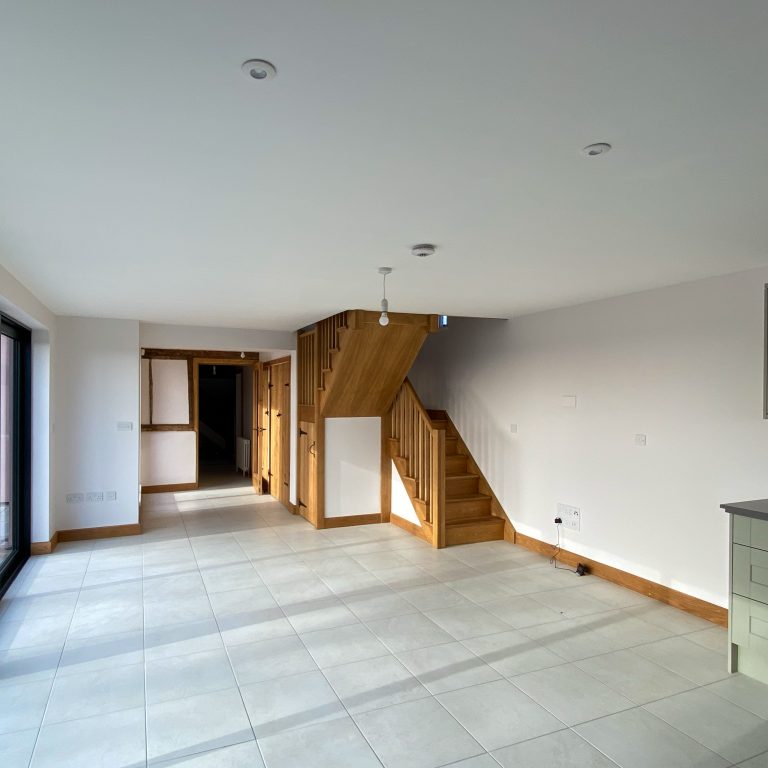 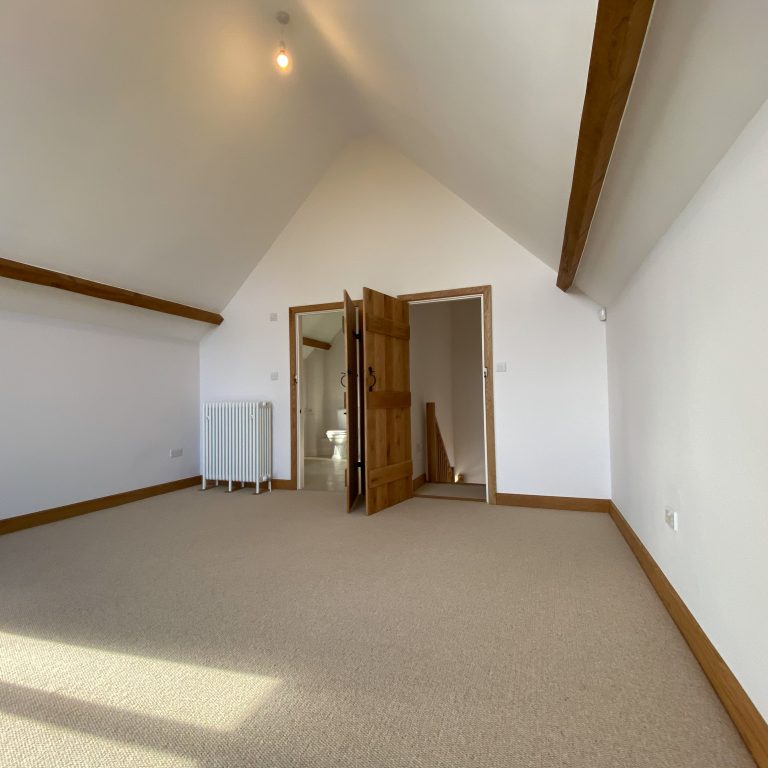 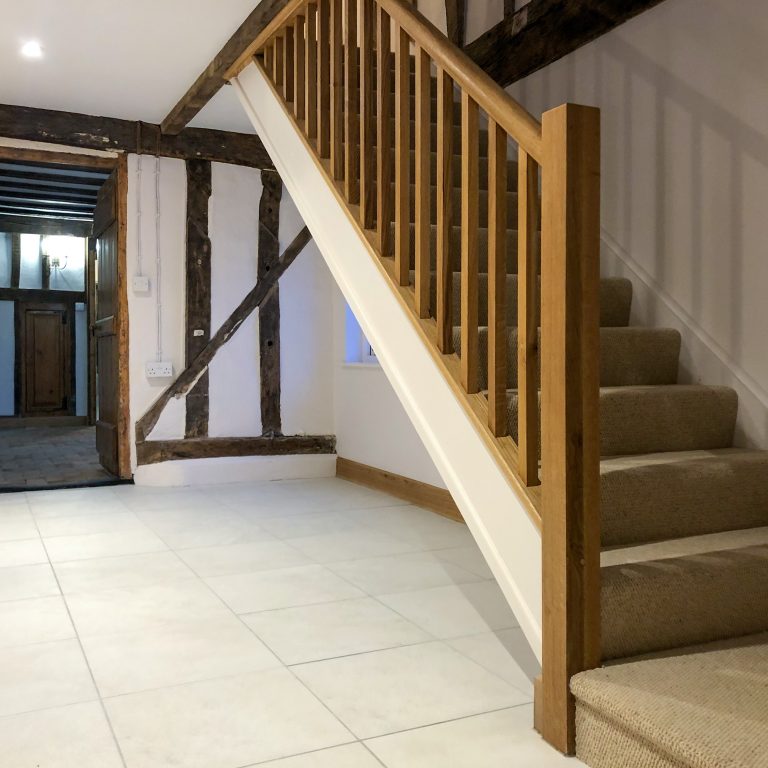 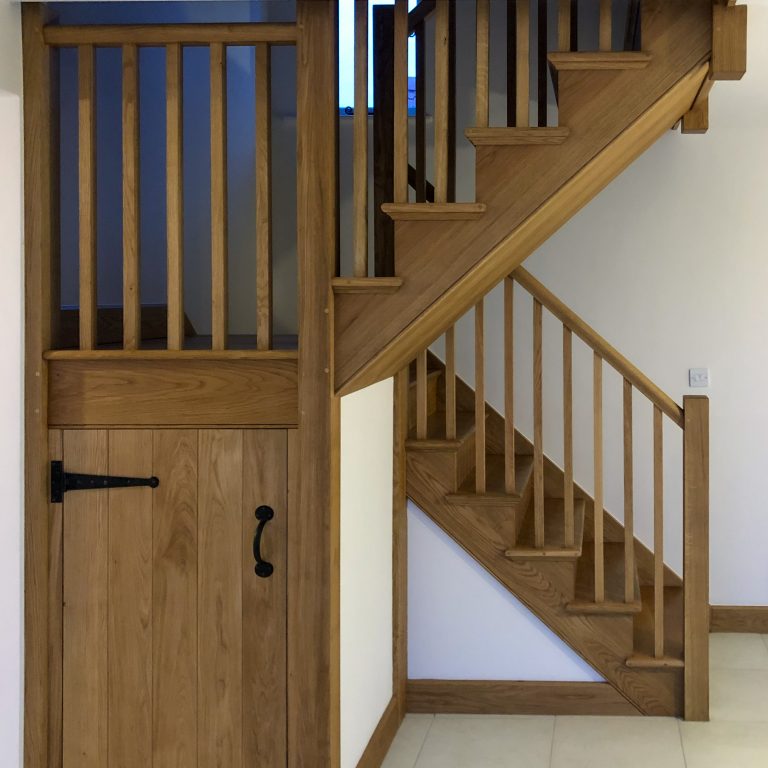 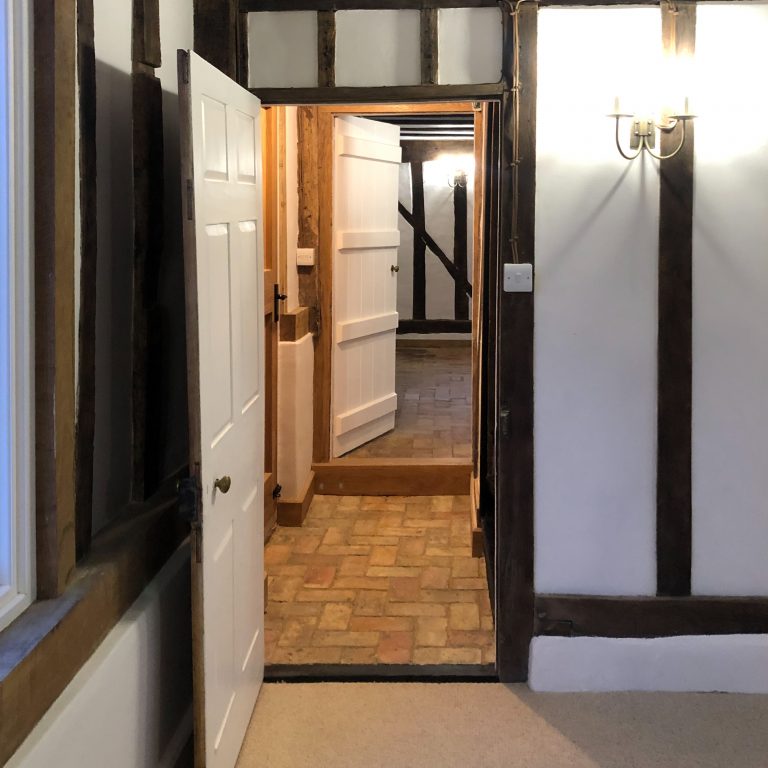 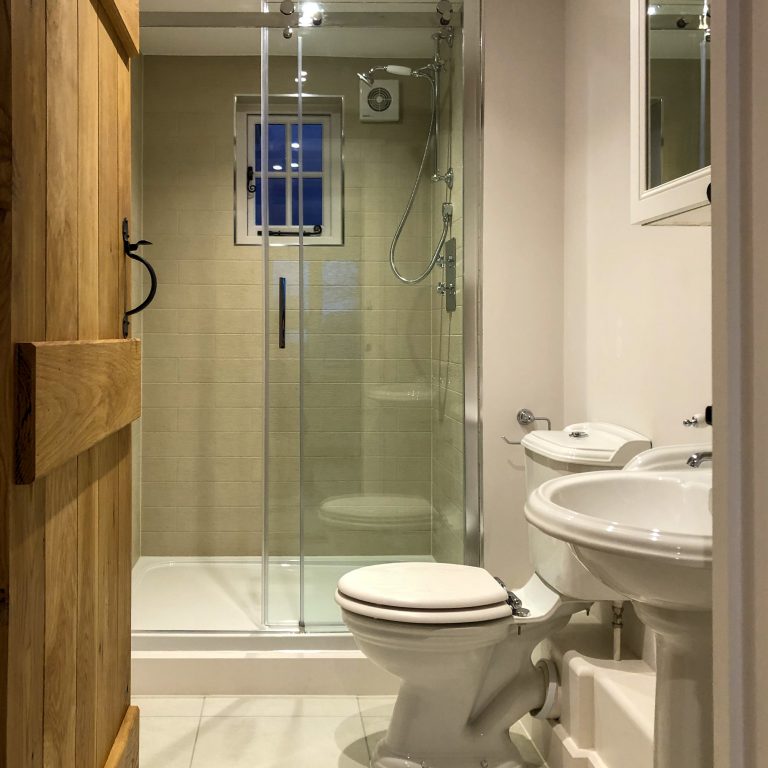 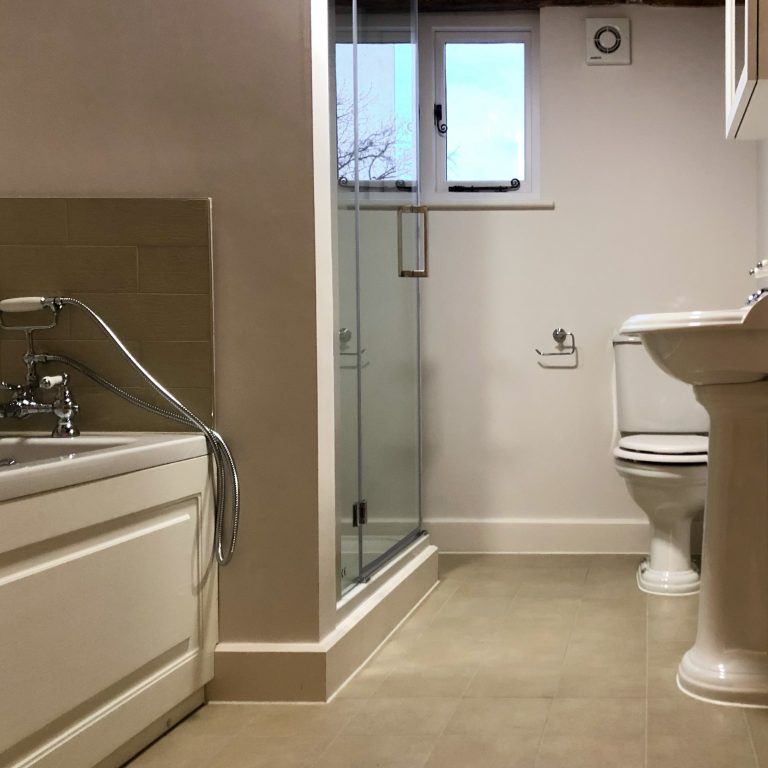 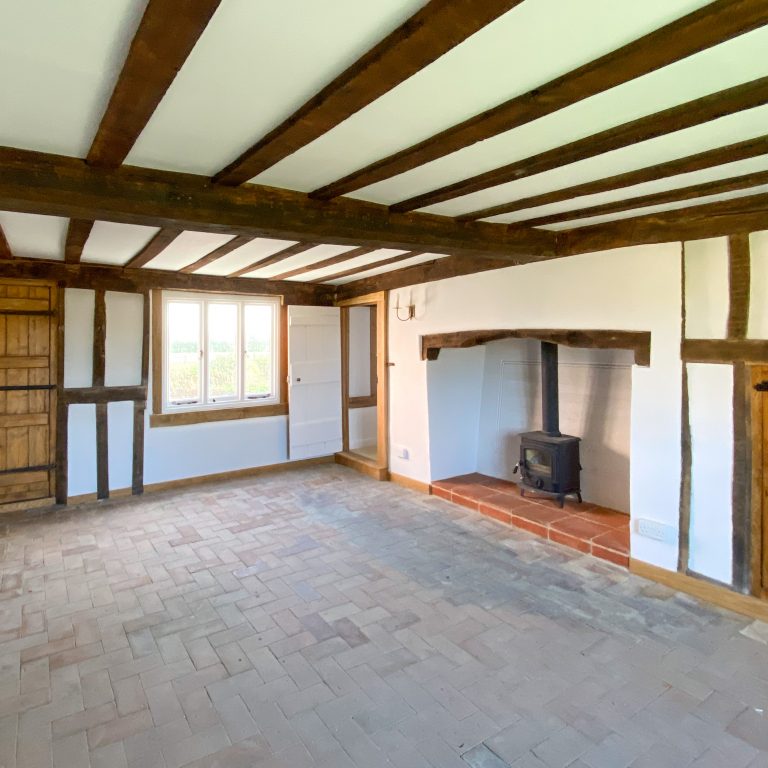 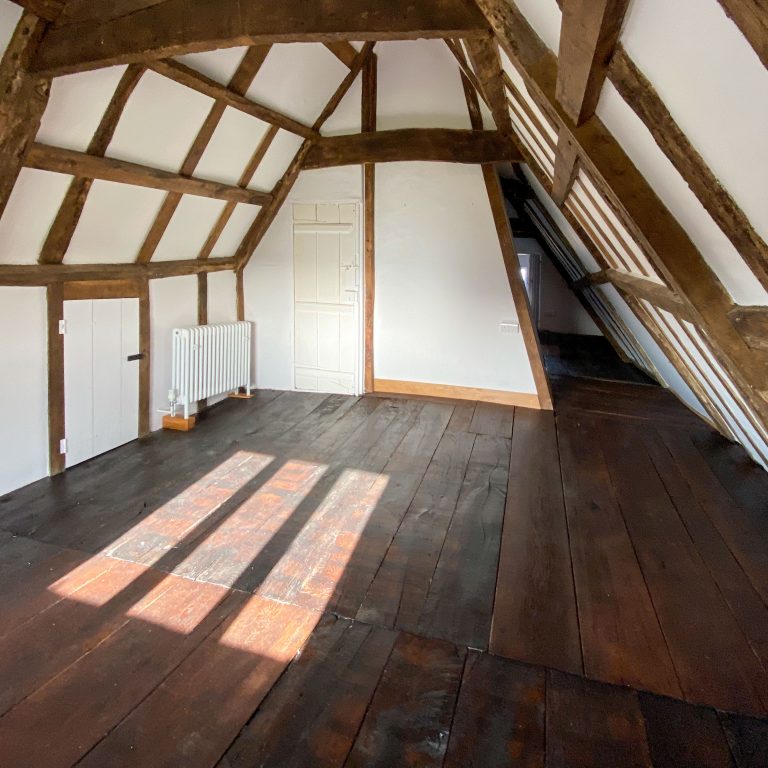 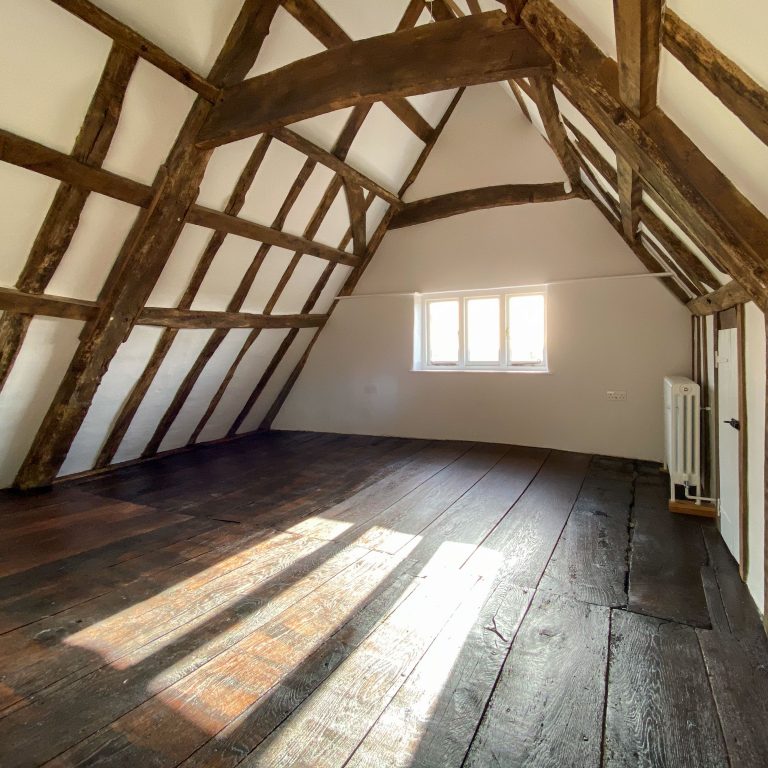 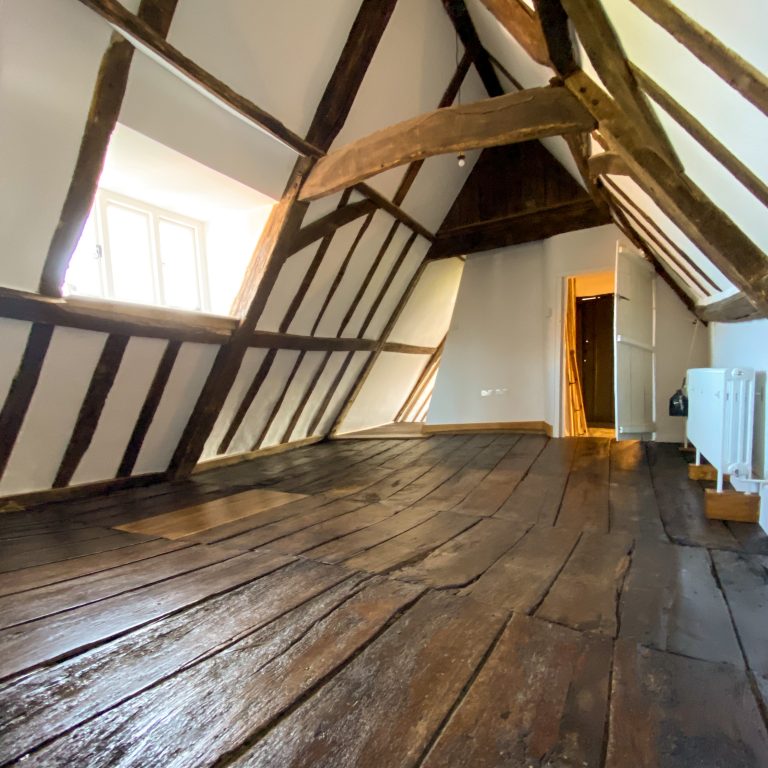 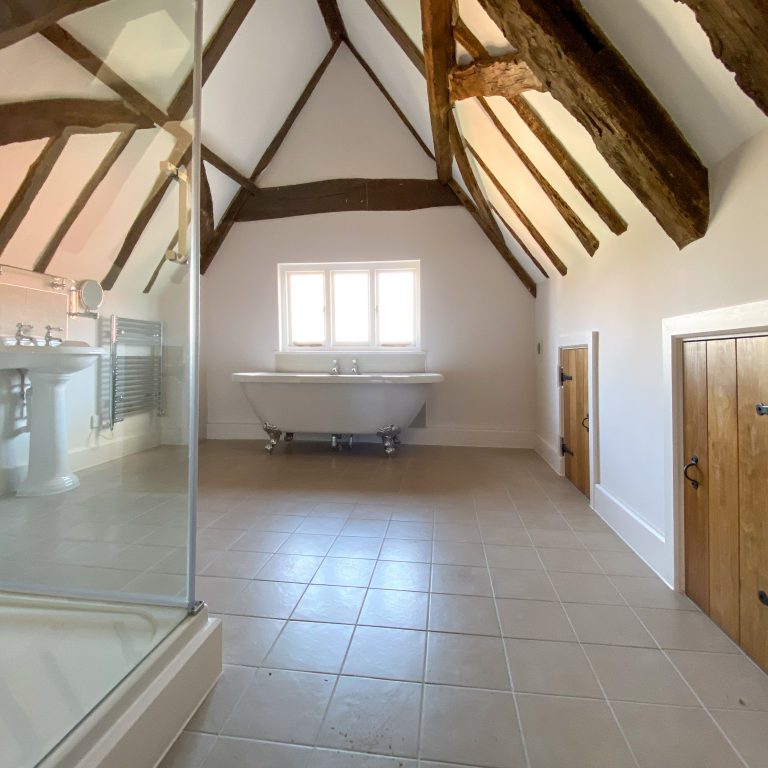 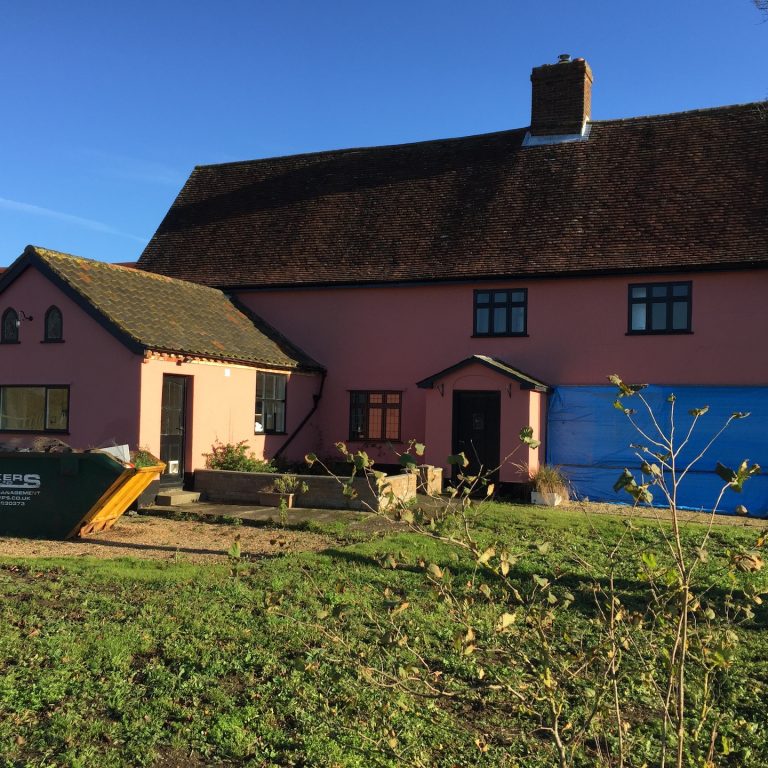 The farmhouse is a typical Suffolk farmhouse: a 3-storey building of primarily timber frame construction that has been extended throughout the eighteenth and nineteenth centuries. This adaptation had led to the principal dwelling being lost amidst unsympathetic and damaging extensions and leading to a sprawling and disjointed property. This alongside lack of repairs led to the property being in a poor condition when this project began.

Initially, the proposal was to undertake a series of repairs and re-order the layout to ensure the property’s longevity; planning and listed building consent was gained for this. Upon reflection, and as investigations began into the necessary restoration works, it became apparent that this would not be cost effective and that a far more comprehensive strategy was needed.

Eventually, following consultation with the conservation officer, the final scheme was arrived at. The principle behind this was to strip the farmhouse back to being closer to its original form by removing the lesser quality extensions to the front, side and rear. In doing this it has allowed us to create a more sympathetic extension to the rear that better complements the house and fits with the flow of the design and layout. The approach to remove this fabric and construct the extension has actually resulted in a smaller footprint, but was considered to be best for the building and applauded as a proactive move during the listed building consent process.

The modern extension retains the building’s vernacular, but has also allowed us to form a contemporary kitchen dining space, with large sliding doors opening onto the garden and Suffolk countryside beyond. It has also created a spacious, light modern living space without having to sacrifice the character and history of the main house, whilst also avoiding greatly disturbing the layout and original fabric. This allowed us to achieve the often sought after 21st century living accommodation within a property full of listed character. The extension has only been linked at ground floor level and not first floor level to ensure that the main dwelling could be read properly and prevent it from being lost behind modern additions as has happened previously.

Details were considered throughout the house to ensure that the completed project was sympathetic to the original house while providing those expected modern touches. This can be seen in the detail of the fit out and specification of finishes and external works undertaken to provide a fully complete house. This also included the full replacement of all services throughout the property. The house, owned by a charitable trust, was always intended to be rented out, and as testament to the project’s success was rented within days of going on the market to the first viewers.

The two main reception rooms have been retained in their full proportions, with both inglenook fireplaces carefully reopened and repaired. The main bedrooms have also been retained, with one re-established though the removal of a modern separating partition. Bathrooms and en-suites have been placed where more modern interventions have taken place to ensure that the integrity of the key undisturbed spaces were maintained. The second floor has also been brought into proper use through alterations to the access stair.

The timber frame and timber boards were all cleaned down and a light touch repair strategy was implemented on brick and timber board floors, only undertaking key repairs which has left the historic camber and patination in place.

In terms of repairs and fabric conservation, Stanaway Farmhouse has been subject to a comprehensive refurbishment and repair strategy. The building was clad in a cement based render on top of an oak timber frame, and regrettably, large sections of the frame was rotten below. Many brick infill panels were loose and unstable and the ground floor plates had rolled, causing significant structural damage to the house. At high level the gable timberwork was in a very poor condition and required replacing. The southern brick gable was also showing signs of detaching itself from the adjoining walls.

It was believed that the render was acting as a structural support and diaphragm to the building, which meant that it could not all be removed in one go. This resulted in a phased approach to the timber frame repairs, where only sections of render could be removed at a time. At each phased removal, a meeting between the architect, engineer and contractor ensued, with each timber and brick panel marked up for necessary works and repairs. Before the commencement of works a series of repair details had been established and costed, which meant when work was in hand on site, the repair methods were known and it was the extent to be established. All new timberwork was undertaken using kiln dried oak with like-for-like proportions to any timbers being replaced or repaired. The repair comprised of new studs and plates and piece repairs and facing pieces, as well as brick panel consolidation and re-pointing. Work was extensive, with over 60% of the building requiring attention in some form.

Upon completion of the timber frame repairs, the entire external frame was clad in a wood fibre insulating board and rendered in an insulating lime fibre plaster from Best of Lime. Internally, plaster repairs were undertaken using the same lime plaster. Where possible, insulation was fitted between the frame, which has allowed us to significantly improve the building’s thermal performance and maintain a breathable frame.

The whole building was clad in scaffolding and a tin roof to protect it from the elements and allow contact working. Whilst the frame was being repaired to alleviate the loading on the building and any potential fabric spread, the roof was removed, this allowed for some minor timber repairs to the roof structure, as well as new multi foil roof insulation to be laid. The use of this insulation ensured that the ridge and eaves details needed minimum alteration to provide a good level of insulation.

The outcome of this project has been to take a property from a dilapidated and incongruent house and create a fully refurbished listed asset that will stand the test of time, using high quality materials and techniques that were respectful of the status of the building. At the same time, the property has been extended in a form that complements and enhances the original fabric and provides a high level of accommodation and historic fabric. The basic brief upon commencement was for this project to be an exemplar of restoration and conservation of a Suffolk heritage asset, which we consider has been achieved.